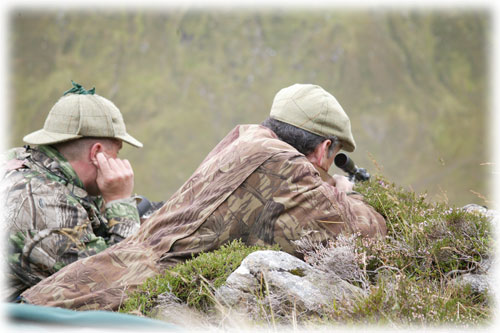 The behavioural and physiological response of a deer to being shot will vary depending on the physical and behavioural condition of the animal and where the bullet has struck it in the body. The aim of this guide is to provide information to assist the deer manager in identifying and recognising these responses, in order to assess whether a second shot may be required. The guide also describes procedures to follow after the initial shot has been taken. The BPG Shot Placement should be regarded as an essential introduction to this topic. Where the use of a dog is prescribed refer to BPG Use of Dogs.

Shooting, following Best Practice should result in the majority of shot deer dying within 5 minutes.*

Immediately after the shot

The reaction of a deer to being shot will differ depending on where it is hit. Other factors include the calibre and type of bullet, the range and angle of the shot and the condition of the deer. As a general guide, the reactions or signs outlined in the following tables may help to assess where the bullet has struck. Refer to the Procedures section overleaf for the correct steps to follow-up to ensure deer are dispatched in a timely and humane manner.

Collapses immediately but attempting to sit up. If the deer has been paralysed, the point at which the bullet has damaged the spinal column will determine the extent of movement in the head, neck and upper body.

Moves a short distance before collapsing. Moves in uncoordinated way.

Stands with body hunched, or may walk off slowly with a stilted gait. The animal may, if undisturbed, lie down after a short period.

May collapse initially, but gets up and runs off immediately.

The presence of the following may help confirm shot placement

Section 25 of the Deer (Scotland) Act 1996, provides a reasonable defence in law if there is a need to follow a wounded deer onto adjacent property and dispatch it in order to prevent suffering. In such circumstances the landowner should be notified of the action as soon as possible, whether before or after the event.