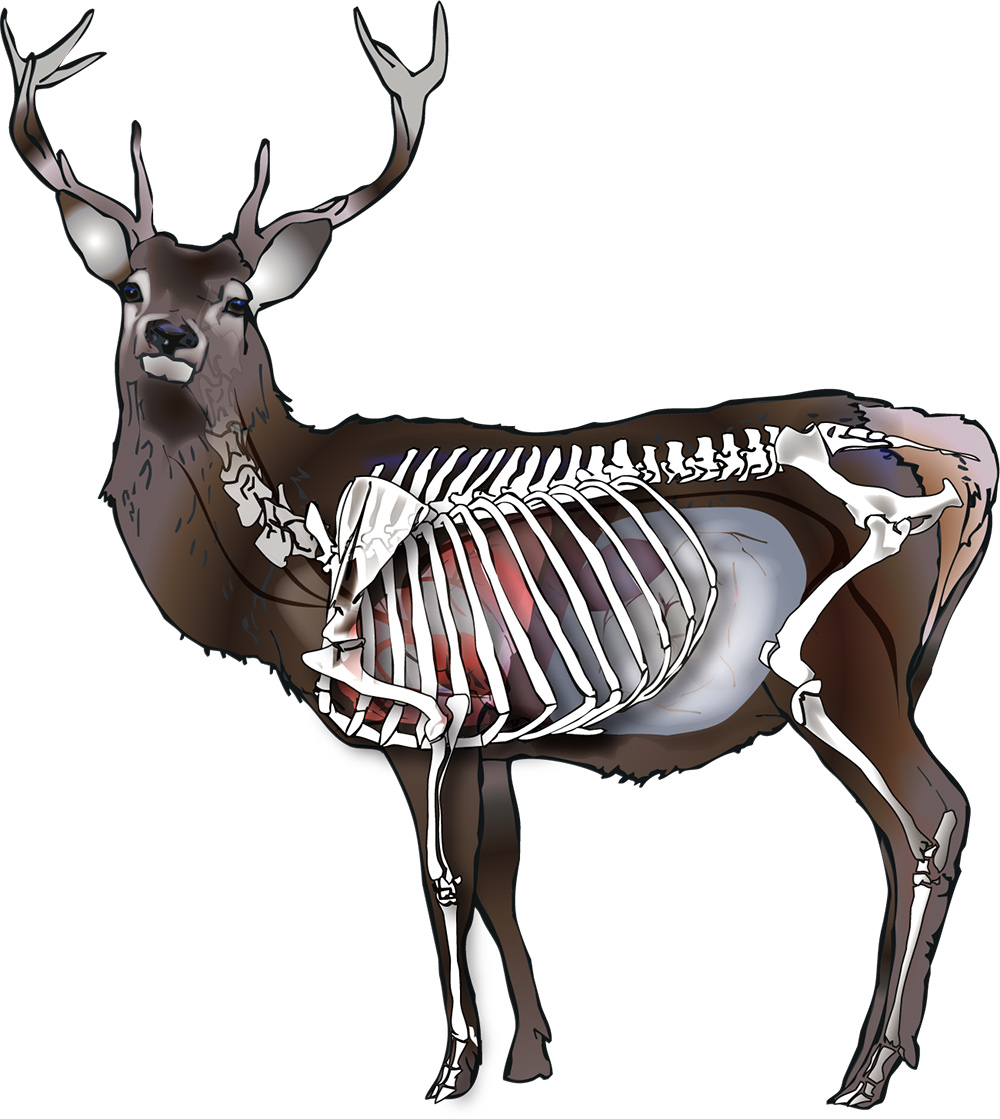 The aim of this guide is to provide information on the anatomy of deer and the consequences of bullet damage, to enable shots to be placed which:

The BP Firearms guides are an essential accompaniment to this guide.

Rapid death is caused by the combination of the temporary and permanent track wounds* of the bullet causing rapid loss of circulation leading to rapid loss of consciousness and death. A well-placed shot, with an appropriate bullet in the recommended target areas, will result in death in less than five minutes in most cases.
‘Slow’ death can result from badly placed shots, (e.g. those rupturing the stomach or intestines), leading to only a gradual loss of circulation.
‘Consequential’ death may follow after a non-fatal wound, such as a jaw injury, which leads to starvation or secondary infection. 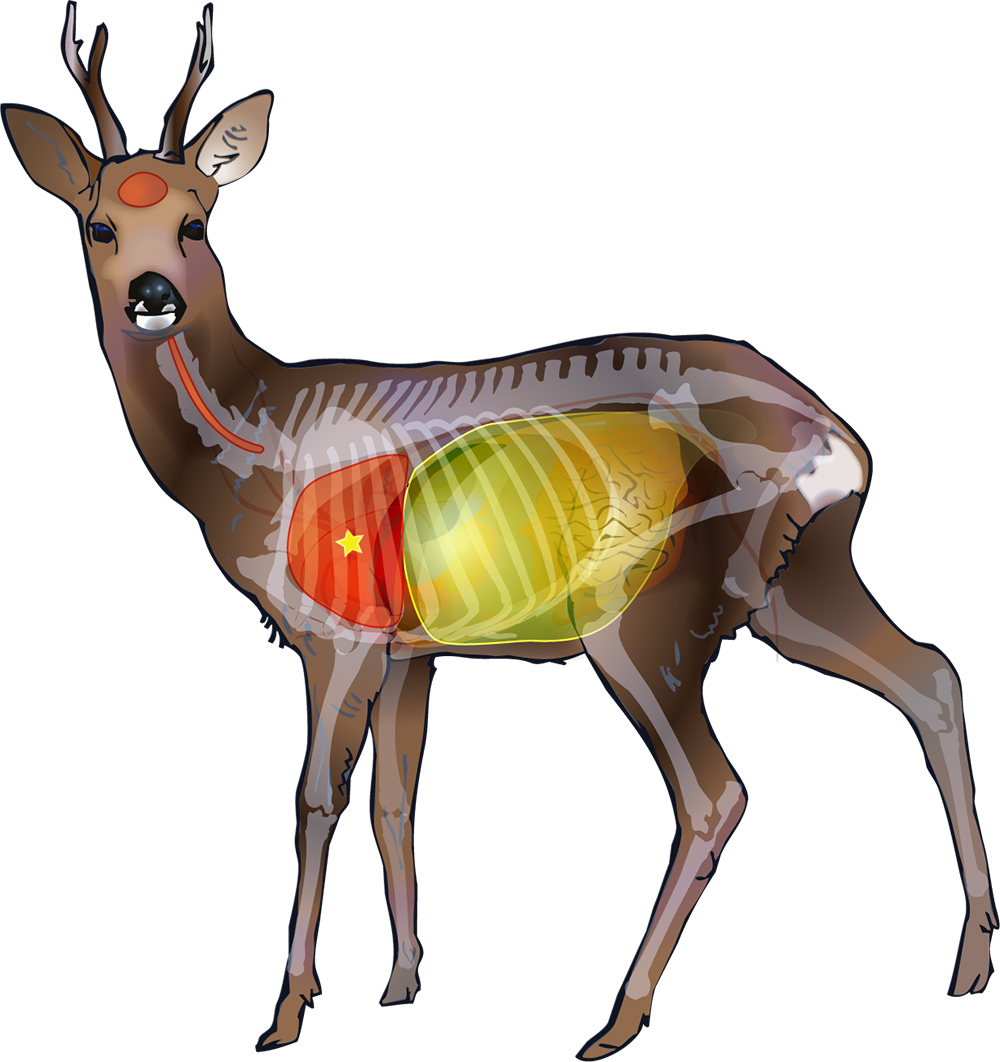 Red areas indicate the vital zones referred to in the text. The yellow star indicates the preferred aim point for a chest shot. The shooting “clock” on next page together with Table llustrates how the chest aim point must vary according to how the animal is presented

The quicker a deer loses consciousness following shooting, the less likely it is to suffer. Loss of consciousness from bullet damage is generally achieved through loss of blood circulation-either through the heart being destroyed or through blood-loss. Instantaneous loss of consciousness can only be achieved if the bullet destroys vital areas of the brain (for example when carrying out humane dispatch at close quarters ).
The aim of good bullet placement should be to induce maximum blood loss and induce unconsciousness as swiftly as technically possible, rendering the animal insensitive to pain. Care should be taken to ensure the animal remains unconscious until there is a complete loss of brain responsiveness due to lack of blood circulation or blood loss.

Current knowledge on the onset of pain indicates that if death occurs within 5 minutes then the likelihood of the animal experiencing pain could be reduced.1 The five-minute period should allow adequate time for the stalker to take any further action necessary.

1: shoulder blade; 2: spine; 3: lungs; 4: heart (note that it sits low in body; 5: any line of shot taken away from 90 degree broadside must consider bullet entry point and the angle of the path of the bullet through the body

Species and Size of Deer

The disparity in size between large and small deer has a significant influence on shot placement. In general, in small deer (either species or calf/fawn) the angle of oblique shots becomes more critical if the heart, lungs and large blood vessels in the chest are to be hit.

Head shots Unless at close range, a small movement in the head of the deer is likely to result in a misplaced bullet which can cause serious and unnecessary suffering.  Head shots, due to the small target of the brain, should only, if ever, be considered at close range, and then only as a second follow-up shot.

Neck shots ae discouraged.  Stalkers should be aware that a neck-shot deer may be paralysed but fully conscious. Not all neck shots break the spine. A non-fatal wound can be caused to the windpipe or foodpipe and the animal run off.

Bullet injuries to the abdomen are likely to cause fatal injury but the time-to-death interval is unacceptable. Bullet injuries that rupture the stomach also increase the risk of carcass contamination.

Bullet injuries to limbs, while usually non-fatal, may result in consequential death and will lead to significant suffering.

Chest shots As a result of all these factors, Best Practice recommends that in order to:

the broadside chest is the best target area for optimum bullet placement, (that is half way up the body and just behind the line of the foreleg). 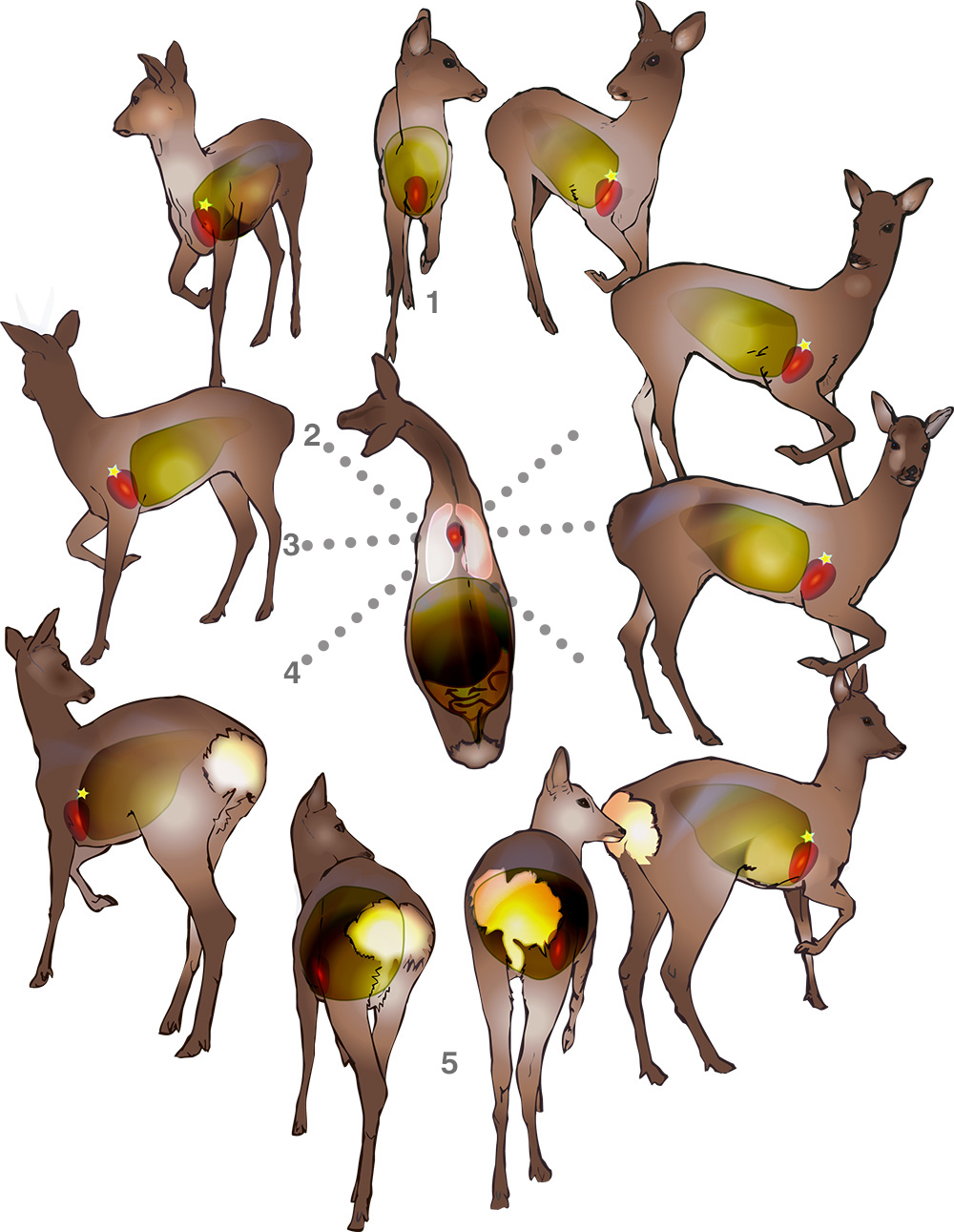 note how the heart is very narrow from frontal aspect, while from the rear it is hidden completely behind intestines. Also note that a 4 inch radius of scatter must be allowed for as a result of rifle innaccuracy, human error, or simply a light cross-wind

The point at which the bullet enters the body and the subsequent path taken by the bullet through the body may affect the degree to which an animal suffers and the degree of carcass contamination caused by bullet damage.

1  There is considerable evidence from people who have been shot to indicate that the onset of pain is delayed for a variable period (usually measured in minutes) after shooting.  It is probable that the same phenomenon occurs in deer.
Follow up
Rifles & ammunition